Terry Finley, president and chief executive officer of West Point Thoroughbreds, did some calculations on August 20 to predict what would be a key event for his organization on August 21.

West Point representatives and family members gather in the winners’ circle at Racecourse Saratoga after the second race. Ghost smoke a 4-year-old son of Ghostzapper was photographed of him after winning the 5 1/2 race on Mellon turf.

And so are the West Pointers, who are celebrating their 1,000th career win.

“That’s a good number,” Finley said. “When I do my calculations, on average every 11 days over the past 31 years, we have the honor of standing in the winner’s circle.”

Phantom Smoke, ridden by Irad Ortiz Jr and trained by Christophe Clement, broke through the gate before the start of the race and was brought back and loaded. He didn’t seem to mind the distraction as he took the field gate to play 7-5.

Finley remembers West Point taking #1 as if it happened yesterday. He doesn’t have an exact date, but it was August 1991. The horse’s name was Sunbelt and he won at Philadelphia Park (now now). Racing Parx).

“I’m still in the military and I’m on temporary duty on the West Coast,” Finley said. “Race is a $5,000 claimant. It’s crazy when you think about it. But when you really think about it, this business and the horses have given us all so much. I’m the luckiest person in the world to be in this sport and enjoy waking up every morning.”

West Point, which has about 600 partners, has 122 horses in training around the country.

Nest impresses the next day

The day after her smashing victory in the $600,000 Alabama Stakes (G1) at Racecourse SaratogaCoach Todd Pletcher is more impressed with his 3-year-old chubby son Nest than him on race day.

“I couldn’t be happier to be with her,” Pletcher said Sunday outside his barn on Oklahoma Training Road. “I’ve rewatched this a few times and was even more impressed when I watched it.”

Pletcher said he wasn’t sure what would happen next for his daughter Curlin who is owned by Repole Stable, Eclipse Thoroughbred Partners and Michael House.

Options include training up to $2 million Longines Breeders’ Cup Distaff (G1) on November 5 at Keeneland or make another start, at the $250,000 Beldame (G2) in Belmont at the Fall Big A meet on October 9, or the $600,000 Juddmonte Spinster (G1) at Keeneland on the same day .

If Pletcher chooses either of those races, Nest will face kids ages 3 and up.

Nest certainly looks to be the lead for the 3-year-old champion, but Pletcher isn’t going to start looking at that right now. He has witnessed some things happen in the past. In 2013, he coached the King of Prussia Stable’s Princess of Sylmar won the TVG American Oaks Coaching Club (G1), Alabama and Beldame Invitational Stakes (G1). Then she lost Beholder in Breeders’ Cup Distaff and lost Eclipse.

Five legendary New York hybrids that competed and represented the show will be honored at Racecourse Saratoga on Saratoga Introduction Day New York on August 26.

Connections from the all-time great New York hybrids will be honored after Thursday’s race on August 26. They will be awarded certificates of achievement for their racing careers on behalf of the program. bred in New York.

Funny Cide won the 2003 Kentucky Derby (G1) and Preakness Stakes (G1) before losing to the Belmont Stakes (G1) and winning his Triple Crown. Trained by Barclay Tagg, Funny Cide, son of Distorted humor was named New York Breeding Division Champion three years in a row and New York Hybrid Horse of the Year in 2003. He was the pony at McMahon of the Saratoga Thoroughbreds.

Tiz the Law, New York Hybrid Horse of the Year in 2019 and 2020, won the 2020 Belmont Stakes presented by NYRA Bets (G1) and Runhappy Travers Stakes (G1) as well as the Curlin Florida Derby (G1). The son of Structure has also been coached by Tagg and has trained at the Sequel Stallions New York in Hudson.

Nicknamed the “Sultan of Saratoga,” Fourstardave won at least one race at Saratoga each year from 1987-1994. Hybrid of Richard Bomze Follow gelding was trained by Leo O’Brien and retired with 21 wins in 100 starts. A level 1 race is named for him at Saratoga.

The commentator, coached by Hall of Famer Nick Zito, was named Hybrid Horse of the Year in New York in 2005 and 2008, the same years he won the Whitney Award. Humorous Meow’s son has won 14 of his 24 career starts. It was bred by Michael Martinez and campaigned by Tracy Farmer.

Fio Rito, son of Dreaming Native put the New York Cross on the map with the 1982 Whitney victory. The two-time New York Cross of the Year was bred and owned by Ray LeCesse of Rochester and trained by Michael S. Ferraro.

Jayson Tatum reveals he broke his wrist in the playoffs 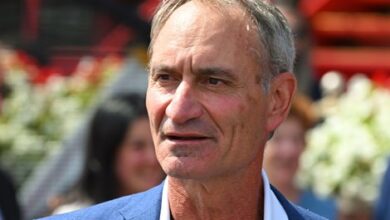 Schosberg will retire after 35 years 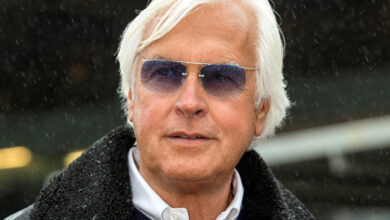 Baffert banned from NY until ‘at least’ early July 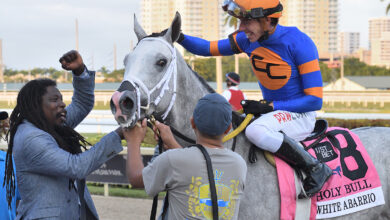 White Abarrio on track for the Florida Derby