Poet Jenny Xie was exploring the library stacks on the campus of NYU Shanghai, where she was a graduate student, when a book with a bright red cover caught her eye. In it, she found hundreds of photographs of China’s Cultural Revolution.

The images taken by Li Zhensheng during the dramatic, often violent period of upheaval that enveloped China from 1966 to 1976, were kept secret until they were published in the United States. Xie devoured the book in one sitting.

Born in Anhui province, eastern China, she moved to the United States with her parents when she was 4 years old. The photos, she said, provide a window into the past shared by generations of Chinese, including many in her family, and among whom she sees little visual material.

“Suddenly this opens up the past of the people I love,” Xie said recently in a garden in Greenwich Village. The photo shoot, she said, “makes me think about how strange it is that I don’t have an intuitive understanding of what so many of my family members have gone through.”

The connection she felt with the images was far-reaching. Xie is a visual poet. Her debut collection, entitled “Eye Level,” won the 2017 Walt Whitman Prize and was a feast of scenery: the rain-stained tin roofs of Phnom Penh, the white sailboats of Corfu. lined up like “grains of rice”. It also concerns the ethics of looking: the viewfinder “cuts the horizon”, the camera “reduces the present” and to give one’s view is to spend “a soft coin”.

Not long after Xie returned to New York, the pandemic began. In her apartment, she regularly goes back to photos of Li – her copy of her own book has become a sort of portal connecting the past with the present.

Looking at scenes where people considered “class enemies” are humiliated and sometimes tortured in front of an audience, known as “struggle sessions”, she will focus on specific people in the crowd. crowd and wonder what happened to them. Over time, this obsession, along with brief tidbits of time spent in China in 2019 and other memories, became fodder for a new collection, “The Rupture Tense,” to be released. by Graywolf on Tuesday and was longlisted for the National Book Award for Poetry.

In the book, the poet examines not only her family’s past and their country’s history, but also explores the subversive power found in examining what has been hidden or overlooked: the repositories. Li’s long-hidden archives, older generations’ silence about the past, and unresolved trauma continue to shape how family members relate to one another.

Nearly half a century after the end of the Cultural Revolution, discussion of the period is still largely confined to public and private spaces in China. Overseas, however, the works of documentaries and novelists, such as Yang Jisheng (who, like Li, is a state news reporter) and Ma Jian, keep records and Discover the legacy of the times.

“The Cultural Revolution was like a surreal nightmare. It’s a wake-up call to read Jenny Xie today,” poet and novelist Qiu Xiaolong, a teenager in Shanghai during the Cultural Revolution, wrote in an email. “In poetics, she chooses a unique form of work, controlled language, to mold these inhuman experiences into an organic whole.”

Xie isn’t the only one gazing into this abyss, but her processing of the experience is particularly evocative. Xie’s lines have an unshakable effect: She cunningly separates images and concepts, rearranging the landmarks of her mind. Tracy K. Smith, who taught Xie more than a decade ago, appreciates her ingenuity.

“It’s a wonderful and subtle use of metaphor that brings out emotion or even spirit in her poems,” Smith wrote in an email. “The metaphor testifies to the feeling that the tools and terms we’ve been taught to rely on are never enough.”

The four parts of “The Rupture Tense” oscillate between the past and the present. In the first part, several short poems focus on Li’s photographs; blocks of text, confined to the page, appear like icons. Atrocities are described in a variety of ways: At a “struggle session”, “the character of a man, stripped of what he possesses, is evident”; at a winter execution, there were “eight stripped trees that fit eight individuals above their knees.”

In these pictures, Xie looks for such small, striking details that, she says, “pierce us, bruise us, pull us into an emotional relationship with a photograph.”

Smith writes, “In Jenny’s view, the Cultural Revolution, which had always been framed as a phenomenon containing a particular place and a particular time, no longer contained that framework, revealing itself. closely related to this place (USA) and now (now). “

Soon after Xie was born, her father received a Ph. mathematics program at Rutgers University. His wife and daughter eventually accompanied him to New Jersey. Around the age of 7, Xie became nearsighted. She said: Vision is a cause of anxiety in the family; many of the members have impaired vision and one of Xie’s grandmothers went blind after suffering a hemorrhage in her eye.

“My parents always instilled in me the fear that my vision would be affected,” she says, “reading in low light, watching TV, these sources of pleasure were always bound up with the fear that I might vision loss.”

Her fascination with physical vision extends to the interpretation of what is seen: She thinks about how a vision is “composed, activated, and reinforced” by its context.

“There are consequences to how we see, what we see and also what we allow not to see,” she said.

A line in one of the opening pages explores the power inherent in seeing and one’s urge to look away: Talk about characters about to be executed in a pair of photos taken of the same scene from different angles different, she writes: “Close the books, they disappear. Open it up and they’re upright again”.

As she grew up, Xie said, the stories of this era were a closed book. “A lot of things are still hidden by those who are used to living inside these deadly silences.”

In 2019, she returned to visit her parents’ hometown, Hefei and Wuhu in Anhui, for the second time since she moved. At 4 years old, she said, Xie was too young to form a sense of self in this setting. But some sensory impressions come rushing in and feel familiar, if not family.

A poem of the same name, “The Rupture Tense”, probes the conflicting emotions of a returnee. A childhood memory is brought back to life: “a tin bowl of braised river snails” and “a needle drawn from its shell”. Another recognition: “The motorbike taxi driver, pointed his finger at a jar of Tiger Balm / dabbed at his temples and nasal septum for aching sanity, / pierced the endless fog of salaried labor wage.”

Beyond the evocative sensations and sweet reunions, Xie finds harmony in the experience of going back – what the poem calls “a kind of retreat by going back”. Identity types — Chinese-American, American and Chinese-American — are contours she tries to blur rather than strengthen, she said; On that trip, however, she felt especially American.

“Both me and my Chinese relatives live in a kind of enduring novel, about how we think about each other,” she said. “I am also interested in questioning the ways in which I place certain beliefs and desires in them and them in me.”

Sometimes she tries to ask about the Cultural Revolution, she said. The fact that she is a writer and an outsider makes people a little insecure. She understands. She noticed a similar caution in her parents, who had long settled in the United States. In their response, she discovers “the aftershocks of that era and the ways in which they became ingrained in the behavior of those who lived through them”.

In China, silence is still practiced. In her article, she tries to trace its origin.

“If they had jotted down lines of poetry, I would never have seen them,” she wrote. She writes about “VPN, encrypted conversation” – the reality of online communication in contemporary China, haunted by the “erratic and annoying ghosts” of the past. She laments for “a kind of collective disfigurement that can never be corrected.”

Beyond river spikes and silences, Xie sees the decay of older generations in her family.

“It made me consider the passage of time, the scale of time, and also the mortality rate,” she said.

Li, the photographer, passed away in New York in 2020. Upon hearing the news, Xie sat down and wrote a poem in memory. In it, her description of how memory works – “coded into cells to cross-pollinate with other mental images” – seems to point to a future where the reader has You can feel pierced by her words and question the past.

His/her story: "My husband spends most of his time in the bathroom" 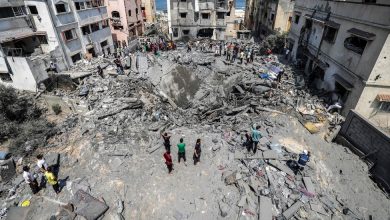 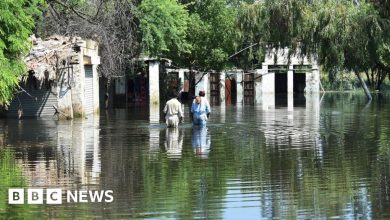 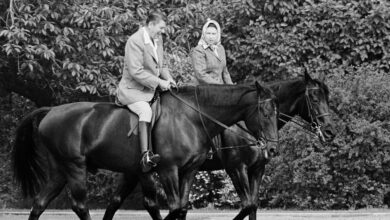 The Queen Met 13 Sitting U.S. Presidents, Who Basked in Her Global Prestige 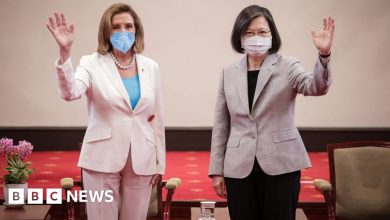