A climate protester glued to “The Girl with the Pearl Earring,” Johannes Vermeer’s famous painting on display at a museum in The Hague on Thursday, is the latest in a series Actions by activists take aim at world-famous paintings in recent months as protesters have sought to draw attention to climate change.

Vermeer’s famous painting from 1665 is part of the collection at Mauritshuisa small museum displaying Dutch and Flemish paintings from the 17th century.

The One minute video clip of action shows a man approaching the painting and sticking his head in the painting. At the same time, another man clung to the wall next to the artwork and poured red substance over the first man’s head and body.

Protesters glued their hands to the wall to indicate onlookers gathered around. People could be heard gasping, expressing outrage and calling the pair “obscene”.

He then assured other patrons that the painting was protected by glass, a statement that did not seem to assuage their anger. Some people can be heard asking him to “shut up.”

René Timmermans, a spokesman for the Mauritshuis museum, confirmed that the incident happened around 2pm local time. He said the artwork, under a layer of glass, was undamaged and it would be displayed again “as soon as possible.”

“Art is indefensible, and Mauritshuis staunchly rejects attempts to corrupt it for any purpose,” Mr. Timmermans said.

Dutch police say on Twitter that it made three arrests in connection with the incident.

Intrigue in the painting, depicting a resplendent young woman wearing a brightly colored turban and an oversized, sparkling pearl earring, has evolved over the decades, possibly amplified by popular descriptions in a novel that explores the identity of Vermeer’s muse. The book, of the same name as the painting and written by Tracy Chevalier, later into a film starring Scarlett Johansson.

Ms Chevalier said in a statement that while she sympathized with the frustrations of climate activists, she hoped they would choose a goal “clearly related to their cause rather than the picture of love”. my likes.”

“For me, seeing a painting vandalized is like witnessing my daughter being attacked. I was very reassured because she was protected by the glasses,” she said.

There have been at least three reported actions by climate activists targeting works of art this month, taking place in London, Germany and now in the Netherlands.

Protesters targeting the “Girl with a Pearl Earring” on Thursday wore shirts emblazoned with the company’s logo. Just Stop Oila group that opposes oil and gas projects in the UK.

Lucy Graves, a spokeswoman for the group, said in a statement that it had not organized the action.

“We applaud everyday ordinary people who refuse to stand by, who step up to action,” she said. “The new end of oil and gas, our demand is supported around the world.”

“If we don’t stop the harmful effects of burning fossil fuels, there won’t be anyone left to see the masterpieces,” she said.

On October 14, two members of the group were behind Heinz cream tomato soup in “Sunflower“By Vincent van Gogh”, one of the most beloved paintings at the National Gallery in London.

The two young activists spoke during an online meeting organized by Just Stop Oil on Thursday. They said the action was empowering, even as they were fueled by fear and anger about the climate crisis and the uncertainty it caused for their future.

Anna Holland, a 20-year-old college student, called it “the most therapeutic and emotive moment of my life,” and an act “on the right side of history.”

Others who joined the protest feared they could face jail time.

“I am not a criminal; I was a scared kid trying to fight for their future,” said Phoebe Plummer. “Where is that emotional response when our planet and people are being destroyed? Where is that shock when we are about to lose our real sunflowers? “

On Sunday, two activists from the Last Generation group glued their hands to the wall after throw mashed potatoes above “Grainstacks“By Claude Monet at the Barberini Museum in Potsdam, Germany.

And earlier this year, in Paris, a lone activist employed an elaborate ruse, disguised as a woman in a wheelchair and smear a cake on Mona Lisa painting at the Louvre Museum.

In the end, no lasting damage was done to the artworks. It’s all behind the glass. 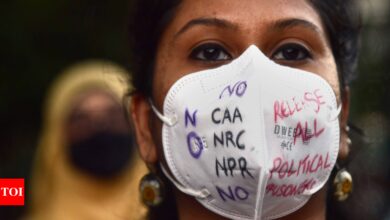 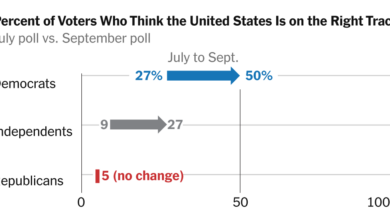 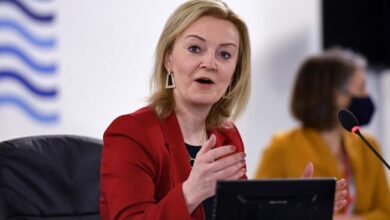 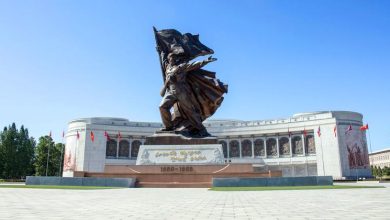